Ever since I met Marshall Rosenberg, the founder of the non-violent communication,more than 10 years ago, I am a huge fan of empathic listening.

In a matter of seconds it creates connection, it calms people down, relaxes them and it solves conflicts. You’d think the whole thing is a complete blessing, and yet I often hear the objection: “But… don’t I make a story true that way?” 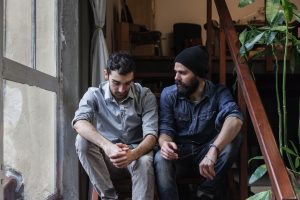 What people mean by that is: Do I not confirm someone who’s just not feeling well in his suffering, rather than help him find his way out? For example, consider a man named Kurt. He has already had a difficult relationship with its neighbor for some time. Now, without warning, over night the neighbor has sawed off Kurt’s long-cherished fruit tree close to his property, because windfall and leaves fell onto his lawn.

Kurt is outraged and upset. When he tells me about the incident, his face is red and he exclaims: “What an a******! Who does he think he is? No respect at all! I will not let him get away with that!”

Through an analytical lense, we could diagnose Kurt with having a victim consciousness. After all, he does see himself as a victim of his neighbor, doesn’t he? And if I listen to him empathically, do I confirm his state of mind`

Let’s find out. This is how it could look like if I gave Kurt empathy:

I: “Man, Kurt, you’re pretty pissed off, aren’t you?”
Kurt: “Oh yeah! Such an a******! Cuts off my beautiful tree just like that!”
I: “That was a shock for you, right?”
Kurt: “You bet! I look out of the window in the morning, and the tree is gone!”
I: “On top of that, it was your favorite tree!”
Kurt: “Yes!”
I: “You must be sad about losing the tree?”
Kurt (calms down): “Mmh, yeah. We got the tree for our the wedding, and for 15 years I have taken care of it and watched it grow.”
(Silence)
I: “It would be nice if you got along better with the neighbor, wouldn’t it?”
Kurt: “I have given up on that. You can see how he is! Idiot!”
I: “Sounds like you cannot imagine things to get better, especially now after the thing with the tree?”
Kurt: “Of course not. Trying to talk to him is useless.”
I: “You’re disappointed aren’t you? Actually you really want good relationships with your neighbors?”
Kurt: “Yes. You know, when we moved in, for example, we invited him to our house-warming party.”
I: “Do you wish he would acknowledge your gestures towards him?”
Kurt: “Yes! I don’t want to harm him.”
I: “This must be really frustrating for you !”
Kurt: “Yes, thank you! It feels really good to get all of that off my chest!”

At this point, Kurt can clearly feel his grief and his frustration. He is no longer angry and his mind is no longer circling around. Instead he is thinking how he might be able to communicate his pain about the tree and its desire for a better relationship to his neighbor.
He no longer feels at the mercy of outer circumstances, but back in connection with what he really wants. That gives him new strength and inspiration – which in turn increases his chance to finally reach his neighbor.

This scenario is fictive, but it shows very nicely what effects empathy has. At the end, it doesn’t lead to cementing a victim status or a negative attitude, but on the contrary, it brings an opening and creates the space for something new.

How does that happen?

As you might have noticed when reading the dialogue above, I didn’t confirm Kurt’s “story” with any word. I stuck with questions about his feelings and needs, and these questions helped him to come into contact with himself again under his troubled emotions. Thus, Kurt could ultimately feel that his real, deep desire was a good relationship with its neighbor.

Empathy helps people find back to themselves. It doesn’t judge, and it doesn’t try to give advice or convince of a certain viewpoint. Empathy mirrors back at the other person, that he is perfectly ok and loveable, no matter what feelings and thoughts he might be dealing with at the moment.
Empathic listening is also a way of being present, and this presence helps the other one to get present again himself.
All these elements support the person you are listening to to accept the situation, to process it and to get into constructive action.

Empathy is an attitude of unconditional acceptance of the other.
It also trusts that something good and life serving exists in him and will come to the surface, even if it might not be visible right now.

This non-judgmental and benevolent kind of being there for someone can be felt. The other person will not have that sense of having to defend himself, explain or justify. Carried by your unconditional acceptance he can instead relax into himself and start using the energy that is being freed up for constructive approach to the situation.

In the end, we don’t make a story true through empathy, but on the contrary provide somebody effective support to let the story go!

This “success” requires the non-judgmental value-free and benevolent attitude of listening I have mentioned. For a deeper understanding of how empathy works, please also read: “How to listen with empathy”.

I hope to have contributed to some more clarity about empathic listening and would be happy to hear what you think!

* You can unsubscribe any time. We also respect your privacy and will not disclose your data to third parties. Promise!

One thought on “Does empathic listening make a story true?”